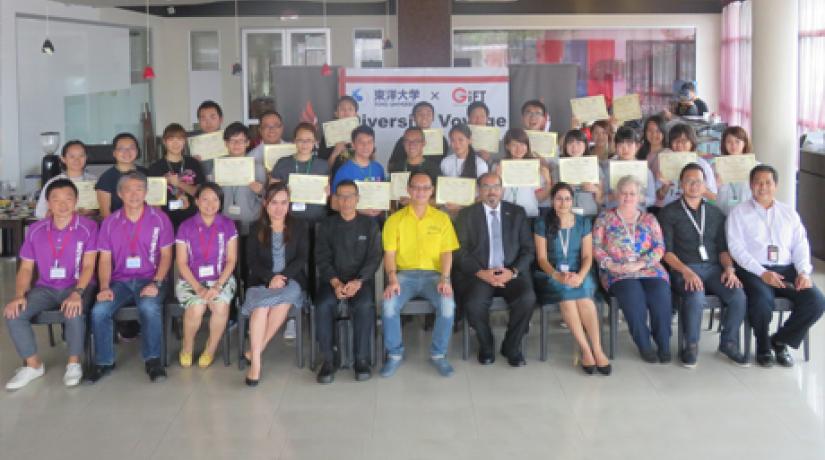 Presentation of certificates to the participants marks the completion of the one-week programme.

The programme was participated by 21 students from UCSI and Toyo University.

Themed ‘Global Citizenship’, the programme aims to improve diversity awareness among the youth and focuses on enhancing culture awareness, appreciation, and community outreach.

During the one-week programme, the students embarked on a gastronomic adventure and diversity walk in Kampung Krokong Peros, Bau as well as throughout various parts of Kuching.

Besides that, they also had the opportunity to visit the Fairy Cave located six kilometres away from the town of Bau.

Apart from experiencing the local culture and biodiversity, the students had the chance to showcase two special dishes at the end of the programme during ‘GiFT Day’.

One dish was based on Laksa paste, which aims to promote the Sarawak speciality to the world while the other was a freestyle dish specially curated based on the theme ‘Global Citizenship Food’.

Christian Louis who currently reads the Diploma in Culinary Arts programme said that not only did the 'Food Diversity Voyage Kuching 2016' encouraged him to be creative and think outside the box, it also gave him the opportunity to know more about the Japanese culture. He also added that the programme had boosted his confidence and improved his communication skills.

“To reach a common goal, language is no longer a barrier. When you are dedicated to making the world a better place, cultural differences is something that you can work around with. These are the two things that I learned from this programme,” said culinary arts student Rachel Chan.

Commenting on the programme, Bernard Jussem the project manager from UCSI said, “Through this programme, we hope to raise the awareness of and sensitivity to different cultures as well as to promote global citizenship. Overall, it was a success as despite their cultural differences, the students from both universities were able to work with each other and produced creative results in everything they do throughout the whole programme.”

GiFT started in 2010 with the concept 'Global Independent Future Talents' to produce global human capital from Japan, but redefined its concept after the great East Japan earthquake. In December 2012, GiFT registered as a general incorporated association with the new concept of 'Global Incubation x Fostering talents'. Since then, GiFT has been holding seminars and workshops in collaboration with universities and companies, promoting global education to empower youth and encourage global citizenship.